Know your customer (KYC) is the process of a business verifying the identity of its clients. The term is also used to refer to the bank regulation which governs these activities. Know your customer processes are also employed by companies of all sizes for the purpose of ensuring their proposed agents’, consultants’ or distributors’ anti-bribery compliance. Banks, insurers and export credit insurers agencies are increasingly demanding that customers provide detailed anti-corruption due-diligence information, to verify their probity and integrity.

Banks are often criticized for using know-your-customer (KYC) norms as an excuse to complicate the process of opening accounts. Many have registered complaints on Grahak Seva, the government’s customer-grievances portal, alleging banks repeatedly seek KYC documents, even after these are provided.Yet, time to time, banks are penalised by the regulator for violating KYC instructions. On December 17, the Reserve Bank of India (RBI) imposed monetary penalties on ICICI Bank and Bank of Baroda for non-adherence to certain aspects of KYC norms, which allowed fraudsters to open fictitious accounts in the name of a reputed statutory organisation and use those for illegal transactions. The regulator also cautioned three other banks — Axis Bank, State Bank of India (SBI) and State Bank of Patiala — for failing to adhere to its KYC directives. We know it is difficult because there are constraints such as a large population and an inadequate database.

Recently RBI simplified KYC norms, saying a single document will suffice as proof of identity and address. It added no separate KYC documentation would be needed while transferring accounts from one branch to another branch of the same bank. Those who don’t have any “officially valid document” are allowed to open “small accounts” with banks. Intervals between periodic updating of KYC documents have also been increased.But challenges remain. Bankers say if an account is used for conducting a large transaction, they sometimes seek additional documents, fearing misuse. This, however, happens on a case-to-case basis. “The entire KYC process becomes difficult to negotiate when a customer has multiple accounts with different banks. If the accounts are split with different holders, it becomes even more difficult to carry out proper background checks. Banks need stronger technology platforms to weed out these discrepancies,” said a senior official of a private bank. Also, in India, the lack of a unique national identifier is a key issue in implementing KYC rules.

HDFC bank has created buzz in the recent times as it introduced the e-KYC (electronic Know Your Customer) norm in collaboration with National Payments Corporation in all of the branches. HDFC also claimed that the bank is all set to install biometric readers for scanning fingerprints to make the process even easier.

What exactly is e-KYC? It could be defined as a procedure that would enable a customer to walk in to the bank with an Aadhaar number and open an account by only by getting his fingerprint scanned. With the help of Unique Identification Authority of India (UIDAI), bank’s system will pull out all data of the customer that is stored online which includes name, address, age and other relevant data necessary and it will also save a copy of the KYC document that remain stored in UIDAI’ servers. The bank will only print out the account opening form with all the details of the customers already in it. 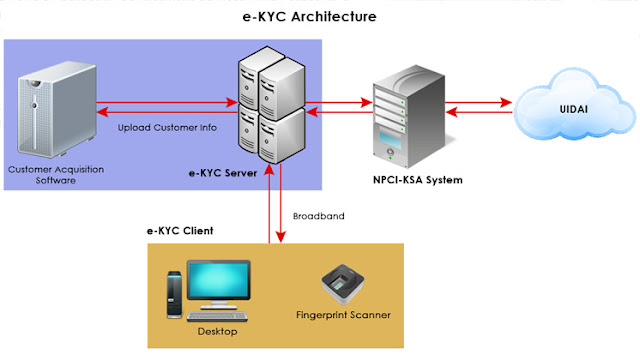 Before HDFC, Axis bank had launched e-KYC using Visa’s connectivity along with the UIDAI. With the e-KYC facilities, it will become easy for the customers to open accounts without any data entry. Moreover, the entire matter will become paperless as a soft copy of all the necessary documents will be saved in the bank’s systems. Banks are also coming up with the insta-account facilities which help the customers get their account opened within no time and also get them the whole account kit- cheque book, debit card and PIN number across the counter.

However, it is not just opening bank accounts, it has become easy to buy insurance policies with e-KYC. The Insurance Regulatory and Development Authority (IRDA) confirmed it recently that the e-KYC services that are stored in the Unique Identification Authority of India (UIDAI) would be considered acceptable by the insurance process. Aadhaar card has become the sole document fir customer identification as that contains all the necessary details for the identification of an individual along with biometric identification. Almost all the insurance giants across the nation are in the process of updating their systems to e-KYC.

Be it opening banking accounts or buying insurance policies, as the e-KYC becomes mandatory, the complete documentation procedure becomes faster, which eventually helps the banks, insurers , customers and the policy holders. Apart from that, the procedure is entirely paperless and it also takes the least turn around time for the insurance companies and the banks, which eventually makes the service better. With time, as e-KYC becomes compulsory everywhere in the banking and the insurance scenario all forms will be in the electronic form and their will be absolutely no physical documents.